The Yomeimon Gate at Nikko 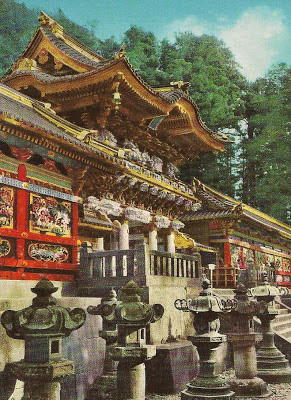 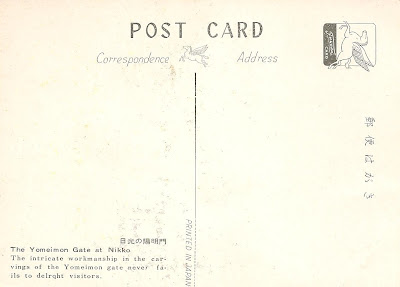 Postcard of the Yomeimon Gate in Nikko, Japan: http://www.nikko-jp.org/english/toshogu/youmeimon.html. No doubt a "delrqhtful" sight. The postcard is from the 1950s.
Posted by Jonathan at 12:10 PM 1 comment: 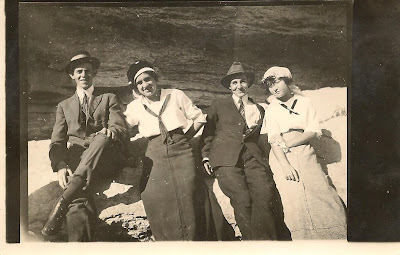 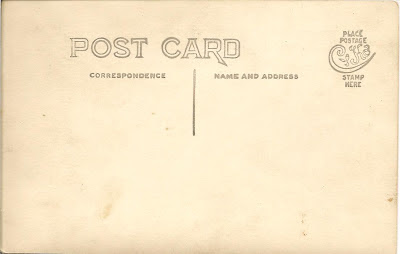 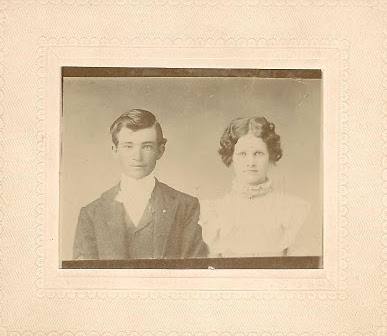 This picture postcard and the photograph came from ancestral sources. I do not know if the people in them are friends of ancestors or actual relatives, or both. The Rosetta Stones which could have decrypted the images are not available. It's always a good idea to label your photographs, or include some kind of note with an explanation at least.

Is it just me, or is there something ambiguous in the photo on the postcard? More than likely it was taken in Missouri. The photo of the young man and woman, possibly also from Missouri, looks particularly old -- it looks to be from the Civil War period or from a little later in the nineteenth century. 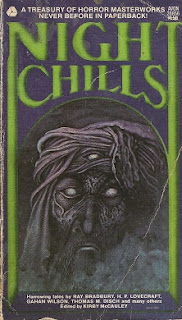 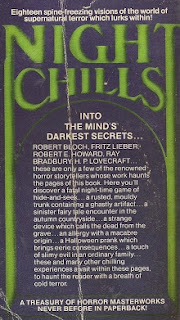 A recent re-read was Night Chills (1975), edited by Kirby McCauley, with a menacing cover painting of a guy with three pupilless eyes, a turban, and skin problems, emerging from mist. The horror anthology is a solid sampler of different horror authors. I bought this copy around 1980 at a little used bookstore which was only in business for a few years, in a house a block or two east, I believe, of the location of the two "panorama" photos I took on Pioneer Boulevard in Sandy, Oregon a few years ago. The schoolhouse building was also at one time a laundromat operated by my family from around 1969 to 1981.

Many anthologies from this period include a Derleth/Lovecraft "posthumous collaboration," and Night Chills includes one, Innsmouth Clay, an account of a sculptor, Jeffrey Corey, who has a dash of Marsh blood, and who goes native after moving to the Innsmouth area. I liked it when I first read it, but am not so taken with it now.  As with any of these "collaborations," the level of writing is mediocre. There's a mashup of elements from The Shadow over Innsmouth, with a racy scene as well, and the usual amped up "rustic" eye dialect, but nothing like the symbolism and ecstatically alienated prose in Lovecraft's original work.

Two authors represented in this collection who use Lovecraft for inspiration, but who also use their own powerful voices and imaginations, are Richard L. Tierney in From Beyond the Stars and Karl Edward Wagner in Sticks. I just had the vaguest memory of Sticks from having read it over thirty years ago, but it's a well- constructed story of cosmic witchcraft and necromancy. Wagner showed artistic restraint, making the protagonist, Colin Leverett, a World War II veteran, working this element into the story in an admirably subtle way. Robert E. Howard's The People of the Black Coast is a poetic story of doom and revenge set on an imaginary Pacific Island (which region would become the setting for a different type of horror the decade after the tale was written).  Carl Jacobi's The Face in the Wind is florid and clumsy, but there are many excellent stories in Night Chills, with work by Ramsey Campbell, Dennis Etchison, Ray Bradbury, Walter De la Mare, Mary Elizabeth Counselman, Manly Wade Wellman (whose Goodman's Place is a great example of his Appalachian horror, written with Socratic irony) and others.
Posted by Jonathan at 1:58 PM 2 comments: 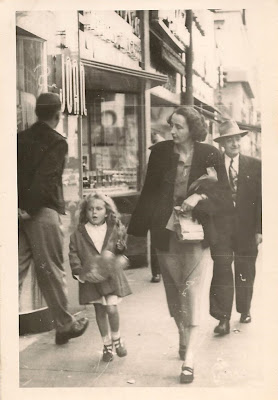 Posted by Jonathan at 9:18 PM No comments: 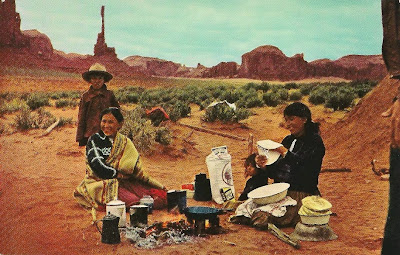 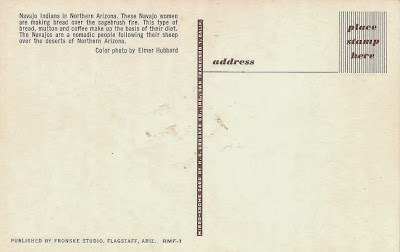 Postcard shewing Navajo women cooking bread, with amazing formations in the background, probably from the 1950s. We are indebted to the Navajos for the part they played in World War II (and to them and other Native American tribes in World War I and other wars besides): http://en.wikipedia.org/wiki/Code_talker.  As with the work done at Bletchley Park, the effort of the Navajo Code Talkers in the Pacific campaign was one of many elements which led to the shortening of the war and to the success of the Allied effort.
Posted by Jonathan at 1:43 PM No comments: 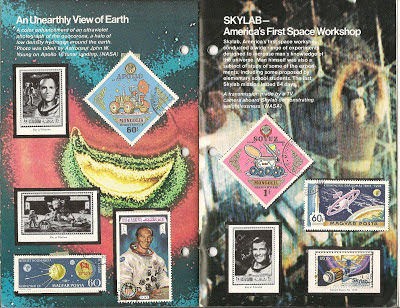 Some colourful stamps from the USA, a Middle Eastern country, and Cold War Era Mongolia and Hungary, in a space-themed stamp book from the 1970s.
Posted by Jonathan at 9:29 PM No comments:

What's the deal with Saturday Night Live anyway?  The night on which William S. Burroughs gave a spoken word performance, November 7, 1981:  http://www.youtube.com/watch?v=fw1U4EJdtgs, (seen in this sketchy Japanese-subtitled video) which I saw on its initial broadcast (and which was immediately followed by a short, parodic film about a French poet, dadaist, literary dog) was for me the highest point of SNL.  The show's toughness as it has lasted for nearly 40 years, its longevity, is remarkable.  I remember when Gunsmoke was cited as an unusually long-lasting show.  Now the goal is to persist for a time at least as long as that from the Ford admistration to the Obama epoch.  The first Saturday Night was broadcast in 1975.  That is a long spectrum of timeliness -- splice in whatever stereotyped image one wants, from the same year of 1975, the last helicopter rising from the Saigon rooftop whilst White Christmas plays, the Watergate crisis recently having ended....

My viddying of this show has been long and complicated.  I have a curious memory of some sort of promotional special about Saturday Night shown a day or two before the first George Carlin-hosted assemblage.  I have a recollection only of John Belushi, as Mussolini or a Mussolini-like figure speaking from a balcony, but can find no record of such a performance (it's possible I'm confusing this with something else).  My watching of SNL has generally been sporadic, from the days of Belushi, Dan Ackroyd, Bill Murray, Gilda Radner, Chevy Chase, Larraine Newman, etc., to the many incarnations since.  Although often uneven, there was a literary and artistic aspect, along with a willingness to risk experiments, in the 1970s and 80s especially, that has for the years since given way to a less challenging approach.

Another occasional avante garde series from the 1980s on SNL were short films with Andy Warhol (or was it an Andy Warhol double?). 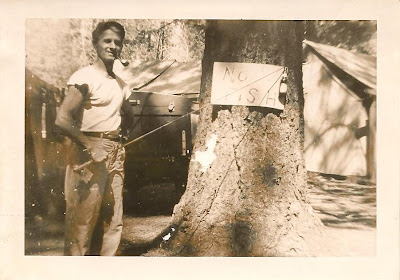 mildewed blowhole from nostalgic pelagian, pivot from the slop of bay. 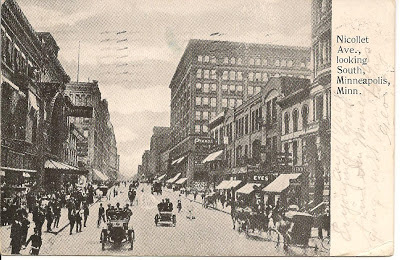 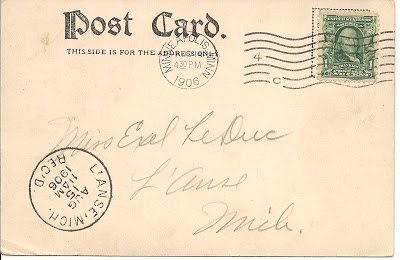 This photo postcard, mailed in 1906, with its oracular "EYES" sign and blend of early automobiles and horse-drawn carriages, pedestrians and bicycles, on Nicollet Avenue in Minneapolis, was addressed to Miss Exel LeDuc of L'Anse, in the Upper Peninsula of Michigan: http://en.wikipedia.org/wiki/Lanse,_Michigan. The pencil inscription next to the photo has faded with the years, but refers to a trip to Minneapolis.

Exel moved to the Northwest sometime after this card was sent, as can be seen in this entry about her and her husband's (George W. Vogel) burial site in Woodbine Cemetery in Rainier, Oregon: http://www.findagrave.com/cgi-bin/fg.cgi?page=gr&GRid=51663608
Posted by Jonathan at 8:53 PM No comments: