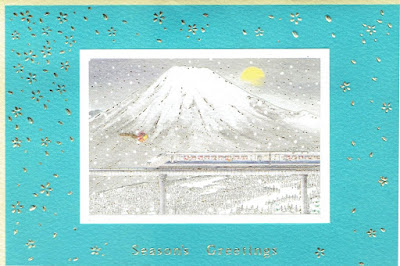 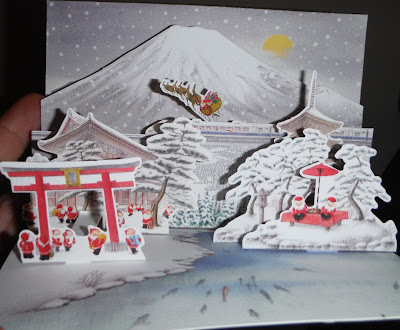 A pop-up Christmas card, which a former Japanese correspondent sent me years back. Note the Shinkansen traveling before Mount Fuji on the card's front.
Posted by Jonathan at 11:12 PM 4 comments:


This web page drew my notice to these outstanding lectures, from 1979, at the Naropa Institute. "Time is everything" -- one hears the writer asking the students if they've seen Apocalypse Now yet, just then a fresh unknown quantity. Roll eyes -- "What do you mean by rotten ectoplasm?" A participant asked Burroughs. Organic material.. I can't hear you, what did you say.  Hassan i Sabbah's reach extended all the way to Paris...   Korzybski, Jane, and Paul Bowles; Crowley, Conrad, Julian Jaynes... The question is far too general.
Posted by Jonathan at 11:47 PM No comments: 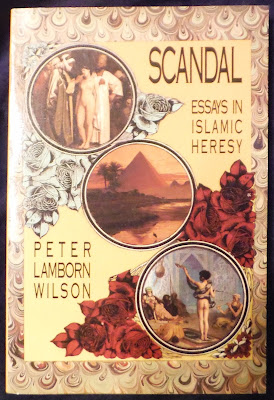 I read Scandal: Essays in Islamic Heresy (1988), by Peter Lamborn Wilson, when the work was crisp off the shelf, around 1989. I unearthed my copy recently. A blurb on the back from William S. Burroughs reads: "Fascinating material on the Ismaili sect and on Hassan i Sabbah... the only spiritual leader who has anything significant to say in the Space Age." The work covered, among various topics, Sufism, mystical aspects of select Arabic and Persian poetry (i.e. "Eros and Style in The Interpreter of Desires,") and Javanese shadow puppetry. Wilson included some material about his journeys to such places as Afghanistan (when it was possible to travel there in relative safety), in the chapter titled "A Note on the Use of Wine, Hemp & Opium."
The volume also referenced the Yazidi sect. Such matters have a different resonance now than they did in 1989 or 1990 (although the 1970s and 80s had a number of bombings, hijackings, hostage-takings, indicating the tenor of events that followed).  The period when I read the book was around the time of a brief and evocative truce of the world, when the Cold War ebbed, before the Persian Gulf War began.

Posted by Jonathan at 8:02 PM No comments: