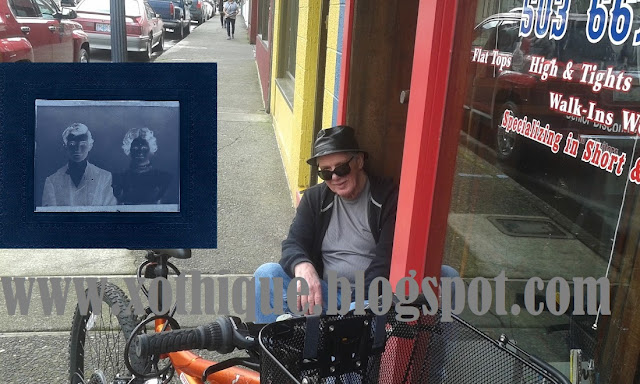 On 6 May, 2017, I visited my long-time barber, whom I knew variously as "Sonny" and "Jimmy," for a tonsorial trip. I had the sudden idea to take a photo of him; which I incorporated into the digital collage above. I had never before snapped a picture of him, in all the years I knew him, stretching back deep into the Bill Clinton era.

The next time I wended my way to his shop, around the solstice, I noticed the traditional striped barber pole was unlit. In the window lay a sign announcing his memorial, which had already transpired the following week.

During the 2008 presidential campaign, he placed Obama and Hillary signs in his barbershop window, side-by-side.

A kind of extradimensional Floyd the Barber, his shop packed with Americana such as a Norman Rockwell print, baseball caps, and quaint signs, his unpredictability and unbroken idiosyncrasies will be missed by this one.

To use a phrase, one which Poe quoted, In pace requiescat!