On the Trail of Enid Starkie’s Rimbaud


I first became cognizant of Enid Starkie's beefy biography and critical study of the sui generis French poet Arthur Rimbaud in the mid 80s, when a friend of mine at that time had the tome; and displayed a copy to me. I have a memory of him and another friend conversing about Rimbaud’s A Season in Hell; with regards to synesthesia. While this is indeed a reasonable take on his lines about the colors of vowels; when I finally purchased and consumed the tome, my understanding of the writer and adventurer exponentially expanded, with this and other matters. She linked the words, inspired by a French primer, with Rimbaud’s study of alchemy.

I ultimately spotted a copy of the tome at a bookstore on Hawthorne Boulevard, in 2018, in Portland, Oregon. The store filled the lower rooms in an older home; inviting a leisurely survey of the shelves. For a sum not more than a few U.S. dollars, I left with a liquidated 1947 edition of the critical biography, (along with some other books); with its jacket weakened and bleached by stray sun rays over long years; but still perfectly readable.

Absorbing its densely rewarding pages; I found a deep presentation of Rimbaud, with intensive coverage of his relations with his mother and siblings (his father dropped out of home life at an early date), his literary stirrings during the violence and uncertainty in the era of the Franco-Prussian War and the Paris Commune (which  he apparently only witnessed briefly, if at all); his frenetic relationship with Paul Verlaine, analysis of his poetry, and a detailed account of his years traveling and living in Aden, Harar, and other locales. Curiously, Starkie left most of the poetry untranslated (and my one year of high school French didn't help too much in this regard, although I read many of the works she referenced in translation, elsewhere); but she translated the examples of correspondence, in the biography. Enid Starkie’s Rimbaud is an extraordinary study of the poet, his life and influence.

Below; an analog/digital collage I made, combining elements of paintings from 1872 by Arnold Böcklin and Fantin-Latour. 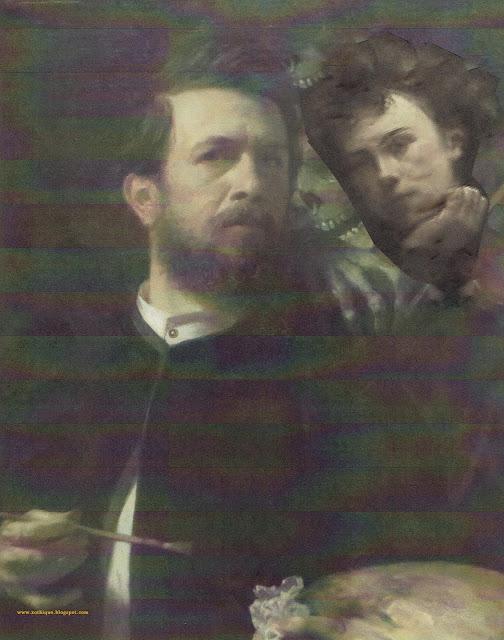